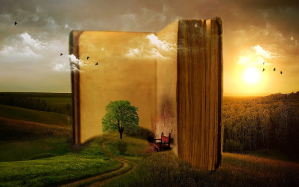 Wherever You Go… There You Are

Of all the taverns, in all the realms, what on earth had possessed her to choose this one?

All she’d really been looking for was a quick bite to eat and a few hours rest in a warm, if only slightly flea-ridden bed to chase away the worst of the exhaustion that had been slowly draining away what little energy she’d had left. As is stood, the food was half-eaten, but looked like the sleep she craved would remain elusive. In truth she wanted to ignore the collapsed body on the floor, and to be sure, she left it to others to tend to him, even though doing so would have been well within her calling, but it was his words that stuck with her.

“Trapped!! The mad beast of DarkHarte has ‘em…you’ve gotta help!! ”

The man had barely gotten the words out before he’d hit the hard-packed dirt on the tavern’s floor. A treasure hunter of sorts by the look of him, though not a very good one, judging by the state of his ragged clothing and worn out boots. Even for someone claiming to have been in a fight with the Mad Beast, his belongings had long since seen better days. Not too surprising really, given the state of things in the realm at large, and looking down at her own meager clothing, realized that they were all likely looking a bit worse for the wear these days. Headed as they were by a king resolutely determined to enrich only himself, while hanging the rest of his subjects out to dry, it was hard to expect much better. The treasure hunter’s words though… how she longed to just forget he’d ever so much as uttered a sound.

She tried in vain for several minutes to continue eating, but the food, which had been moderately pleasing before his rude interruption, was now like ashes in her mouth. How could she ignore something… nay… someone in trouble, when she was part of the cause. It’s true what they say, you can run as far as you want, but wherever you go – there you are. And if you can’t escape your past, then you know it’s time to face it.

“Rescuing it is then,” she mumbled to herself with a heavy sigh, shoulders slumping in defeat as her conscious won out. “Well, assuming of course, that my past doesn’t kill me first.”