Sorry for the radio silence. I keep hoping life will take a giant chill pill, but very clearly that’s not gonna happen any time soon. You’d think with all the time I now have to sit at home I could use at least some of that for writing. I mean, it’s not like I don’t still have at least 3 projects in various states of completion (Darkharte, in particular, is so close to being a finished manuscript it’s not even funny). But my brain just can’t.

My mental health was a little funky even before the current situation, and now my anxiety is through the roof and my brain is in the constant state of hyper-alertness, and anytime I try to focus on actually writing something it just… flails. I can’t focus on much of anything other than stuff that requires zero brainpower. Leverage re-watch for the win!!

But there is one thing that I did do. I’ve been thinking about it for a while and since I am unable to do anything else constructive, I figured I could at least get this done. As much as I loved the original cover for In Plain Sight, the more I’ve lived with it, the more I felt that it was just a little misleading. Ry and Eli’s story is, of course, a central part of the book, but so is Ry and Matt’s. And even more importantly, and what I really wanted to convey in a cover is that it’s all Ry’s story — a young woman who risks everything to save the people that she loves most in the world.

So, the new cover is essentially the same as the old one, but with one very distinct change. I hope you like it! In any case, definitely let me know what you think! 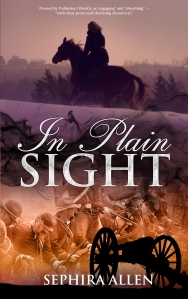 The current paperback version available on Amazon still has the old cover (the new one is updating, but if you give it a few days it should be good to go)

My debut novel, In Plain Sight, will be released on August 7, 2018!! The Kindle version is currently available for pre-order on Amazon. Print copies will also be available by that date (not sure about pre-order yet).

For those of you who have been working with me on this project over the years, you may recall that particular day is a significant one in the book. Once I realized how close I was to getting everything together and ready for publishing , it quickly became clear that was the perfect day to launch Ry and Eli’s story into the universe.

I’m still working on pricing for the print copies – that’s my main hold up at the moment, now that I’ve finished all the last minute editing. My original set up is pricing a lot higher than I want it to (due to some of the distribution options I’ve picked), so I’m going to fiddle around with it some more to see if I can’t get the price down some. Either way, the Kindle version will be $3.99 when it’s released, and for those that don’t have a Kindle, there is a free Kindle reader app that is available for almost any device. But if you are like me, having a physical book in-hand is a lovely thing, so I will definitely continue to look for a solution that allow that happen in the best possible way.

I’m so happy the way this all worked out and I really can’t wait to share my book with you all.

Take notice… this is why we always order a proof copy first!!

I really thought I was done editing, but as I was reading through, I found a lot more issues than I was expecting. Thankfully, most of it was minor stuff – spacing, a few random typos, duplicated words in short proximity, etc… I mean, it was probably fine as it was, but if I noticed them, I’m sure someone else would have too.

I expect that there are still things I’ve missed (and once it’s released, if you find something please let me know), but at this point I really think I’ve done just about as much as I can to it. Of course, I thought that before too.

What? I’m a perfectionist. I can’t help it. XD

Despite earlier predictions, I’ve been a busy little bee these last couple months. Not only was I able to complete the editing of In Plain Sight, but after considering all my various options, I have decided to go ahead and publish it myself, rather than continue to attempt a more traditional route. While there are benefits to traditional publishing, as an author, you still end up doing a lot of the same things (in terms of marketing) and so, if I have to do most of the work anyways, I’d rather not share the rewards with anyone else. While I’m getting everything ready to go – and I will announce the release date very soon – I thought I’d give you a little teaser and reveal the awesome new cover art for the book.

I am so thrilled with this. I don’t even have the words to express myself properly. I was so worried, because I knew what I wanted (in my head), but had no idea how it would translate to the finished look and the artist – it’s like they could read my mind. It’s perfect, and I hope you all love it as much as I do.

So, without further ado…